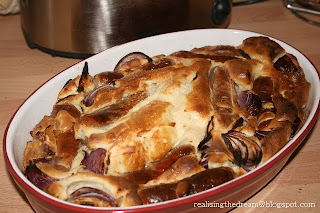 I thought it might be nice to have a few weeks exploring all the things that can be created from the humble sausage. I love having sausages in the freezer as they are a nice quick easy meal, but there must be more we can do with them....

I thought I would start with a nice, very traditional English meal, Toad-in-the-Hole. Now, although this is typically English, and my family is English, I don't remember getting it at all as a child. I don't know why as my mum was a keen cook (and still is!), it was probably due to the fact that she made amazing roasts! Had no need for the humble Toad-in-the-Hole.

Put 8 sausages and two onions (cut into wedges) into a baking dish. Drizzle with 2 tbsp of oil and season with salt and pepper. Cook for 20 minutes until everything is browned.

Put 150g of plain flour and 2 tsp of English Mustard Powder into a bowl and season. Whisk 2 eggs and 300ml milk to make batter.

Pour into the hot dish with the sausages and cook for 30-40 minutes until golden. 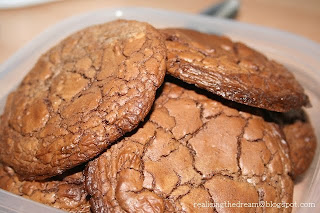 Finally!! We have Broadband back on at the farm! It has only taken since about the 17th of December! We finally decided that Sky was a no go. We had continually had to call them to be told they would call us back - they didn't. We then called up and they said that an engineer would need to "gain access to the property" and they would call back with a date and time - they didn't. We then asked to cancel the order, that apparently takes 30 days! We said that was ridiculous, so they did it in 4. And, suspiciously enough, cancelling the order apparently fixed the issue that the engineer supposedly needed to come out and fix....? So we are now with BT who said they would turn on the Broadband on the 17th - they did. They said they'd have the modem delivered on that day and left if we weren't around - they did. So hurray for BT and hurray for Broadband!

This means that there have been SO many changes on the farm since my last proper post! Well, I'll give you a run down of whats in store for you guys in the catch up posts coming later this month...

We have finished the floor in the living room and are trying to find the motivation to get on with the walls..

There is a new 'bed' in the vegetable patch and the raspberry bushes have been planted...

The seedlings are coming along well and we should be ready to plant a new set of them to get a bit of continuation harvesting going on....

Also I am going to start a little series of recipes... Things To With Sausages ... starting with a nice traditional English Dish - Toad in the Hole.

So that's what we have in store for plus more.

You may have noticed that there is a picture of some cookies on this post... this is because I have, for the first time ever been able to make proper cookies without turning them into little cakes! These worked and you have never seen someone so proud with a biscuit!!! So if you would like to give these a go (they are VERY easy) then here's the recipe:

1. Preheat the oven to 180 C / Gas mark 4.
2. Melt chocolate and butter. At the same time, in a small bowl combine the flour, baking powder and salt.
3. In another bowl, whip the eggs with the sugar. Add the flour mixture. Add in the melted chocolate and stir.
4. Make small balls of dough using teaspoons. Place them on a tray covered with baking parchment.
5. Bake for 10 to 12 minutes in the preheated oven.