A Reason for the Interlude... 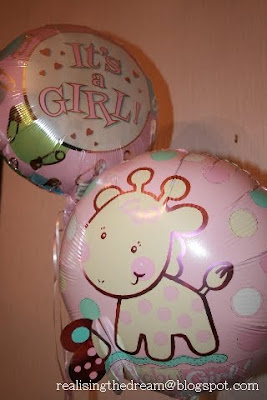 There has been an interlude in the Realising the Dream blog updates and I have a perfect excuse...

Our little family of two became a family of three. Our new little girl was born on the 14th of September and is our first baby. We were in the hospital for about four days and since coming home we have all been learning a new routine.

As you can imagine our new little one is taking up a large chunk of our time so there may be some delays in the posts for a while. However, rest assured that the blog will continue and the house and garden have lots of news which I will share with you shortly!

Farm Mum has been looking after the garden and dutifully weighing and preparing all the vegetables while I have been away and Farm Guy, between visits to the hospital and looking after his new charge has been organising the plasterer for the upstairs bedroom - which I can now reveal will be a nursery! I have some grand ideas for it so I will be keeping everyone up-to-date with how that goes!
Posted by Rosie at 08:00 4 comments: 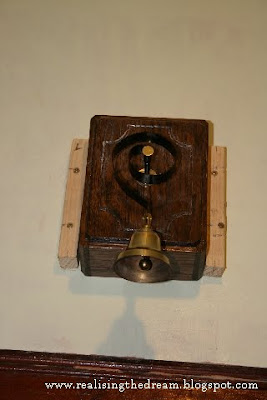 Okay, I haven't said much about the house itself at the moment but I intend to rectify that this week. First things first, the door bell. The house did not have a doorbell, this meant we relied on being able to hear someone knocking at the door, which, when in certain rooms or upstairs was pretty tricky.

But hear lay the first problem, what kind of bell. I wanted something traditional looking, Farm Guy wanted something cheap and simple! My traditional bell was somewhat expensive and so even I had to admit that it probably wasn't the most economical but I couldn't shake the thought of not wanting a tinny rendition of 'Oh When The Saints' every time we got visitors!

But my luck was in, heading to the local DIY shop for something else I spotted that the bell I was after was now less than 1/2 price!! No stopping my negotiating this time and Farm Guy relented... Awwww...

And so the bell was duly bought, brought home, unpacked and... deemed to not be working! Nuts, after all my fuss about wanting this bell the thing didn't work. Back to the shop it went and a replacement was secured. 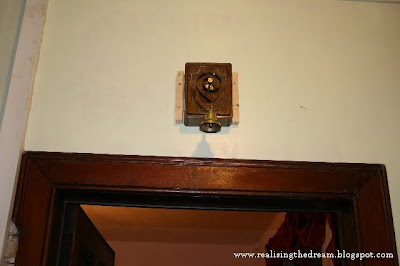 Home it came and it worked! Hurray! Farm Guy put it up on the wall in the hall above the living room door. (It looks squint but it honestly isn't!!!)

We tried out our new bell. The mechanism was so violent that, with the fittings supplied, there was no way to stop the thing flinging itself against the wall. The sound of the wooden box hitting the wall was almost louder than the bell itself. And to top all of that off, the buzzer from the back door didn't cause the bell to ring at all! 100 metre radius my Aunt Nelly!

The only way that Farm Guy could stop the box from flapping about was to put a couple of 'stops' on either side. These now need to be painted or stained!

But at least we had a door bell. Only problem is... it rang every time you walked into the dining room. Or sat on the sofa!