Sad News on the Farm 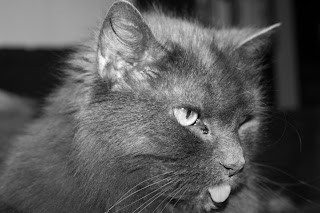 Sad news from the farm this week.  Our farm cat Sable had to be put to sleep last Tuesday.  I found her collapsed in our kitchen and a trip to the vet told us that, although she was essentially healthy in every other respect, a blood clot had formed and had become lodged in her spine causing her to be unable to move her legs.  She was 16 years old and so we are happy she had a good long life but she'll be missed and we are sad that it had to be so healthy apart from that.  It was a frustrating decision to make.
R.I.P Sable (always ready to make us laugh!)
Posted by Rosie at 22:58 4 comments: 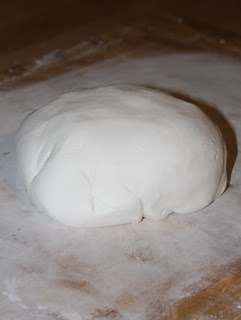 This post may make me look crazy, or like someone who has too much time, but after some fussing in the kitchen I have found a great recipe for Fondant Icing! Yes, Fondant Icing!  I was making a practice of my christmas cake - don't ask about the Xmas Cake, TIP: when it says 160oC do it at 160oC not 190oC!  Rather crispy outside to my cake!  That is why I need icing, icing covers all sins!!!
I have been wanting to make my own fondant icing for AGES now, for various reasons:
I had found several recipes before but they all used gelatin and as soon as I see gelatin in a recipe I just turn away.  I always just end up with a blob (or blobs) of gelatin in my 'whatever-I'm-making'.  But then I found this recipe that uses just marshmallows and Icing Sugar (Confectioner's Sugar)!  I couldn't believe it would be so simple, I saw the recipe - Melt Marshmallows - this could get messy, I thought imagining everything stuck to everything else after I had finished.  I was wrong!  If you ever need icing you HAVE to try this it was SO easy and simple.
Fondant Icing
6 oz white marshmallows
12 oz Icing Sugar
(basically you need to use twice as much sugar as marshmallows)
2tbsp water
Put the water and marshmallows into a large bowl and microwave for 1 minute.  Stir mallows with a spatula.  If they are still a bit lumpy give them another 30 - 40 seconds.
SLowly start adding your sugar until the mixture appears to take no more and has lost some of its stickiness.
Turn out your icing onto a board dusted with icing sugar and begin kneading, if you have any sugar remaing then knead that in as you go, until the icing is smooth.
Use straight away or seal in airtight container and keep in the fridge!
If you want coloured icing add your food colouring after melting the marshmallows.  To colour pre-made icing just make a disc with the icing, add a couple of drops of colouring and fold icing over.  Begin kneading and keep going until the colour is uniform!
Posted by Rosie at 19:42 1 comment: 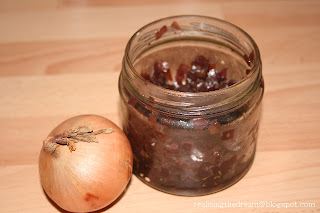 I got some requests from my last post to 'make with the recipe' for Red Onion Relish!  So this is what I shall tantalise you with today.  It is dead simple but was a real hit at the BBQ!! 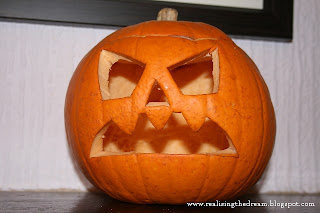 We decided that this year we would have a big fireworks party. We invited various neighbours and family around and ended up with 11 people, which is a fine number as it is really the first party we have ever hosted with people other than family. Anymore than that and I think that we would have felt a bit overwhelmed, particularly with farm baby to look after as well.
I love having groups of people around as it meant that I can cook some of the recipes I love but are for many, many people. I don't tend to make cheesecake for instance as it means that the pair of us would be eating cheesecake for a week! So a party is the greatest time for those big recipes!!
We went for a barbeque and bonfire. We set up one of the old barns (in fact the cow shed!) with chairs and a table and lamp borrowed from my Farm Dad's caravan which we currently have in our driveway. When Farm Dad got there he decided we needed a carpet down, so that came out of the load waiting to be taken to the recycle centre! Once the other tables, BBQ and a fire pit brought by our neighbours the barn was very cozy! A bit smokey as the first choice of positioning for the fire pit was slightly wrong and filled the barn with smoke but it is petty airy so it soon cleared.
Farm Baby loved the fireworks, well she did what I assume baby's do when they are happy and contented, she slept. Yep, she slept through the entire thing! With so many people ready to look after her it wouldn't have been to much of an effort!
For this party I made White Chocolate and Raspberry Cheesecake, Halloween Pumpkin Cake and a Bacon and Mushroom Quiche. This was what was on my list but when I spotted a recipe for Red Onion Relish I just had to make it too, perfect for the hot dogs and burgers. I will add the recipes for the final two on my recipe blog in due course.
Posted by Rosie at 13:30 3 comments:

As you know I decided a wee while ago that I wanted to learn to make my own clothes.  And I had a few successes, however when it comes to practicing if you get it wrong making a big item then it is quite a waste of cloth and money!
Yesterday I was looking for clothes for Farm Baby and two things struck me;  firstly that there is never (like buying clothes for me) exactly what I want and secondly that she will grow out of things so fast at this age that it just isn't worth buying really lovely things (at least not a lot of them).  Then another epiphany hit me, here I had a tiny tot who needed clothes and I needed to practice!  I could make clothes for her with my leftover materials, I could get exactly the clothes I wnated for just the cost of my time and if it went wrong there wouldn't be a huge loss of money and cloth!!  Excellent.
So I set about looking for patterns.  I found a very basic one here which would give me the general idea, but it still wasn't 'special' enough for me so I edited it myself, added a Peter Pan Collar and Capped Sleeves as well as matching both of them to the skirt and this is what I ended up with... 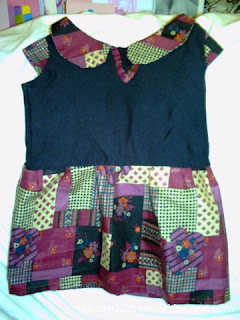 Apologies for the photo: my usual camera has a flat battery and I have NO idea where the charger is, so I am using our cheap and cheerful camera we bought for taking underwater photos when we were on holiday!
I am really pleased with how it turned out and it has given me a lot of confidence for trying to make other things for her!
Posted by Rosie at 22:50 1 comment: