This Saturday we hit the auction house again. We were really only there for a look and a browse but where is the fun in that! We secured ourselves a spot at the ring side and they brought on the vintage jumble, that's the kind of sale it was by the way. They had everything from glass-less oil lamps, to old milk churns to cafe signs and tractor seats. Boxes just called "Spares" and "Old Tools". As well as enough bits and bobs to build your own tractor! Farm Guy was after a pair of bolt cutters which he secured against little opposition. I had a nose around the ring as the bidding went on to see what I liked the look of. There was a giant glass jar hidden away behind a large kist (wooden chest) but I couldn't see a number.  "I'll just wait to see them hold it up and make my decision then" I thought. 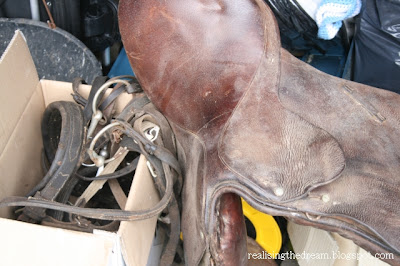 In amongst the jumble was a large number of old horse harnesses, bridles, collars, shoes and bits.  All split into various small lots.  I was interested to see what the interest was on them.  Answer - none at all.  Not really surprising as they were listed as 'Harness' with no indication of size, condition or even if all the parts were there! The auctioneer was dropping as low as he could with still no interest and was combining lots left and right to get them to sell.  People were walking away with 3 or four lots for a couple of pounds.  The second from last lot was a saddle and two bridles.  He dropped his price from £60 starting to £1!  Nobody was interested.  The last lot of horse artifacts was a driving harness, all squished into a box.
"Combine the last two then" he called down to the guys in the ring.
He tried starting a £30 for the two lots but came down and down and down to a sea of blank faces.
"£1?" he repeated again and again, looking around.  I nudged Farm Guy, "Go on.  For a laugh"
"£1" he said waving his book.
Off went the auctioneer "£1. I got £1. £1. £1. £1 bid" No point.
"Sold!"
"Hurray" I said, "What did we win?"  I had been so interested in the saddle I hadn't really taken in what the second lot was.

The saddle isn't that bad condition although I don't think you'd want to use it and the harness and bridle leather is very warn, again, not sure you'd trust it, but it might polish up nice for some kind of decoration somewhere!  And it was just a £1!  There is a kind of nice feeling to be living on a farm and to have reminders of the past around you.  Something very secure in that feeling.

We were interested in the kist so we hung around, however so were many others and we were quickly out bid.  Ah well, farm baby was getting restless and so we decided to head away.  As we were leaving I saw the glass jar being held up from the corner of my eye.  I'd forgotten all about it.  I heard bidding was £1.  I quickly waved what I had..
"£2"
"Sold!"
Hurray, my glass jar.  They called it a churn.
"It must be the jar from an old butter churn" I thought.  One had sold earlier, the kind that is a glass jar with a rotary blade hanging inside - turn the handle, churn the butter.

What I thought I had bought was this: (that's what they held up, and quite happy I'd have been with it too!) 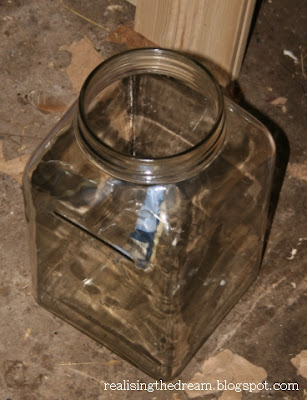 What I actually bought was this: 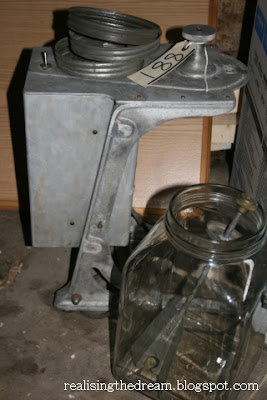 The full kit of an electric butter churn.  It is pretty old and has a cable but no plug.  I don't think I will trust the electrics on it till I have asked Farm Dad to bring his tools down and take a look.  Part of me hopes it does work but even if it doesn't, I still have my nice storage jar!

It was a lot of fun and there was so much to look at.  Outside it was all about the farm implements and that included stone troughs, mangles, carts, potato sorters, tractors, bits of engines and tyres. 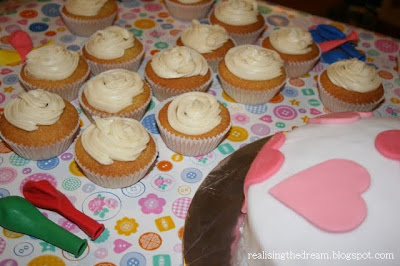 It is Farm Baby's First Birthday tomorrow!! I cannot believe it has been a whole year already!  It honestly doesn't feel like it.  We have no plans so far as the weather is ghastly at the moment, we'll just have to wait and see, but I have spent the evening baking.

I am very pleased with this cake.  Its only a Victoria Sponge but it is the first time I have successfully covered a cake in fondant icing!!  I also attempted colouring my own icing to make two shades of pink for the hearts and I think it came out pretty well. 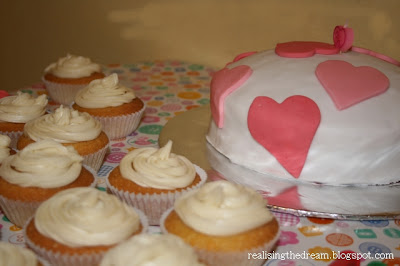 In keeping with my theme I made little jam filled and iced cupcakes to go along with the cake.  Her ladyship is having a week long celebration as the two sets of grandparents cannot make it on her birthday, nor can the make it on the same day this week.  But that in itself is good, she has a three day birthday and we can spend her 1st birthday as just the three of us. 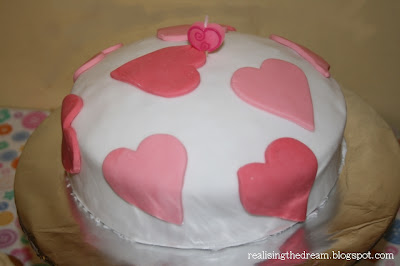