Mooing in the Night & Other Stories..

ing but that is what we were doing. Driving home we spotted three calves making a hasty retreat up the road and back into the Dairy Farm opposite. After we parked the car, Farm Guy went over to investigate and found at least 10 calves randomly wandering around the yards and barns. The pen where they were supposed to be had been "cowed" and the gate stood slightly ajar.
We phoned the dairy owners, who live just down the road and soon we were joined and began the process of rounding up the calves. It was a one at a time job in the end as there were so many places that they could slip down between buildings (and they would if they could) but soon all were safely back in their pen. Well, I say all, but two had managed to squeeze in amongst the older calves so we decided to leave them until the morning.
I love cows. Many people think of them as 'dumb ol' critters' but they are in fact so intelligent and curious. I love it when you approach a field of young calves, only recently away from their mother, and they crane their necks towards you, their loud sniff sniffings. Desperate to find out what you are but always just to nervous to let you get close. Walking a dog beside them always reminds me of a game we used to play as kids. One person stands a distance away with their back turned, everyone else has to creep up behind them. The person at the top can turn around anytime they want and if they see you moving you have to go back to the start. First to touch them on the shoulder wins! Just like this the cows follow the dog, when it turns the interested party behind stops and keeps still, the following continues when the dog turns back.
Yep - I love cows!!
Posted by Rosie at 08:00 1 comment:

My Recipe Features on Foodista!

Summer has chosen it's colour this year and it appears to be Yellow, well definately on our hill anyway. There is a sea of buttercups stretching down from our veggie patch (which we are fighting to reclaim from said buttercups) and during the hot weather we have been having lately it is amazing to stand in the warmth, look down over the yellow, under the blue and listen to the Buzzzzz.. 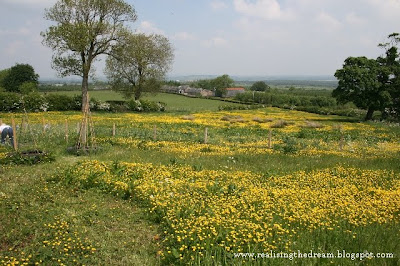 As you can see our veggie patch beds are most defintaley in amongst the flowers. Farm Mum, there, sporting fine gardening headwear, is doing her bit in the battle of Raspberries VS buttercups. The bed in the foreground is the potato/brussel sprout/carrot patch and so far is holding it's own against the weeds. The cycle of heavy rain followed by days of sun is doing wonders for everything growing - wanted or unwanted! I love the buttercups though, so although they will continue to encroach I got Farm Guy to only cut down paths to the flower beds and around them. Anyway, all those flowers will encourage a nice lot of bees and butterflies to the patches, that can't be bad! The photo below is pre-strimming hence why Farm Mum is disappearing amidst the weeds! 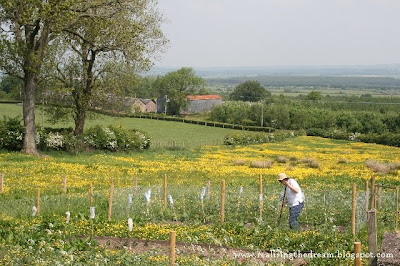 The potatoes are doing well. As you can see there are four varieties here. A salad, a first early, a second early and a main crop - mainly until we find out what is the best to grow on our hill. These little guys had done so well growing so big, I rewarded them by covering them over again! Plenty more growing to do guys! 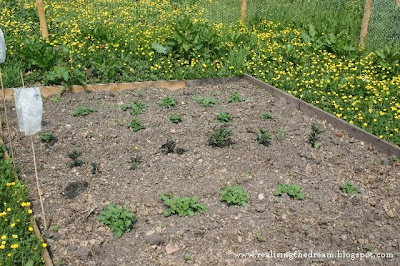 What is that through the buttercups? 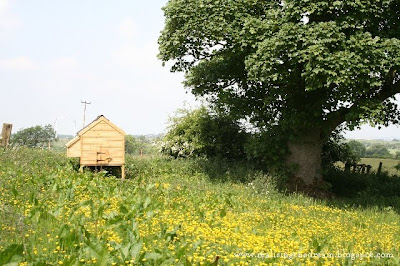 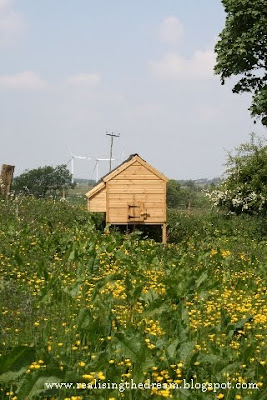 I got the urge to make Mississippi Mud Pie, I have never made it before and so set out to fine the perfect recipe. I didn't find one I was completely happy with so I joined a few and got this and it certainly gave me the chocolaty 'mud' I was after! There seemed to be SO many things you can do in the Mud Pie genre but this was the closest to what I know as Mississippi Mud Pie, hope you enjoy! 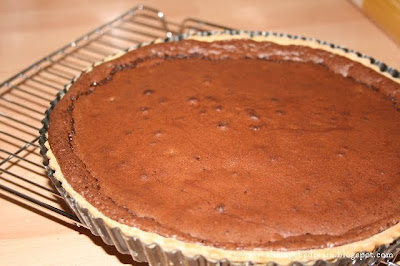 For the pastry case:

May KEEP for two days but this didn't last one! I missed out the coffee as Farm Guy doesn't like it and it was still delicious, if you like 'em chocolaty then this is for you! And I found it really easy to make! 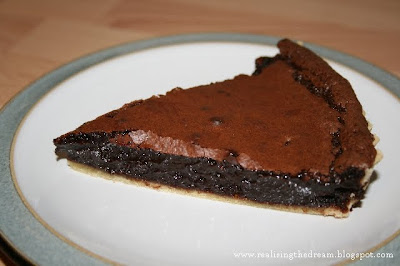 My Recipe is Featured on Foodista
Posted by Rosie at 08:00 No comments:

All week I have been busy crazily painting the walls in our living room. Changing them from a "Smokers" Yellow to something called Hint of Pashmina, which is an extremely light pink. We knew that the living room needed lifting and the walls really made it feel old and worn, it needed some freshening up!

After the walls were finished the only thing that was letting the room down were the curtains. I like the material, it is lovely and soft but again they have seen better days and it was time the moved on from curtain duty! 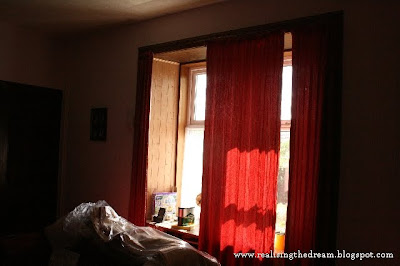 (Sorry about the dark photo, still cannot work out how to get my camera not to do that!) But these are they, three curtains to cover the somewhat large window. I hit eBay with a vengeance. I finally found something which looked perfect, used curtains that had been made to measure in exactly the right dimensions for our window! The seller was amazingly patient with my questions (Are they lined? etc) and my requests (Any chance of a Saturday delivery?) But Saturday arrived and found me waiting patiently by the front door... is it wrong to be THIS excited about curtains? The delivery man couldn't find us - no change there - but eventually the large box was mine. I opened it up and surveyed the contents - first thought YAY! Second thought, how do I put these up then! Turned out we needed an extra pole in addition to the one we already had so this was sought.

The day was a busy one, see another post for those updates, so it wasn't until late that I began putting them up! The curtains were easy, all the fancy stuff wasn't! But by midnight I was done (with the first set anyway! Only one to go in the Dining Room!) And I was VERY pleased! 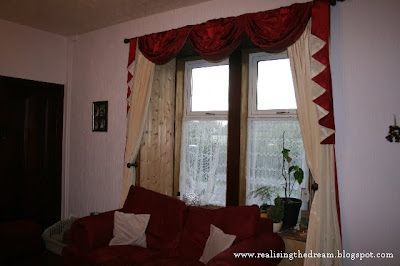 (Say hurray for getting to grips and getting a better photo!)
It is amazing what a good set of curtains can do, the whole room suddenly looked finished and mighty grand, if I do say so myself! I guess it should be noted that here is the proof that some nice accessories can do a HUGE amount to a room! This means the Living Room is pretty much finished - one down....
Posted by Rosie at 20:46 3 comments:

Several days ago we received one of those delightful "We're Sorry we missed you" notes through the letterbox. It was from a parcel courier company. For the life of us we couldn't think what we had ordered that would require courier delivery. Anyway we left the note outside asking for the box to be left in the sheds out the back when the called again. I returned home the following day to fine this mystery package...... 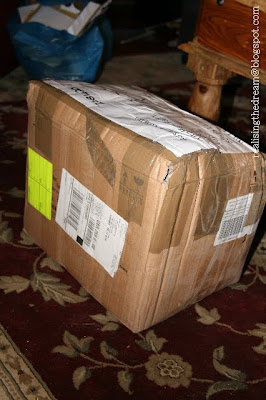 It was addressed to me! I had not ordered anything this big (or heavy)! I checked it over and the outside didn't help, it was obviously a re-used box, I had definitely not ordered 12 Italian Style Ice-Cream Scoops! Checking the delivery label it said "Contents: 1001 products". I honestly thought to myself "They must be small to fit in that little box!" So, putting me out of my misery, I opened it up to discover..... 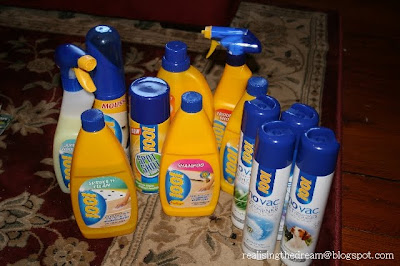 Ahhhh! 1001 products! Still didn't explain why I had them though, I had definitely not ordered them... There wasn't even any paperwork with them! Just a big box of cleaning products... was someone trying to tell me something! There was only one idea I could think of... I went and checked my email...

Sure enough, filed by my handy spam filter was an email stating "Congratulations! You are one of our six lucky winners!" I had entered a competition in a magazine a couple of months ago for cleaning products and some "Days Out" vouchers and this was the cleaning stuff arriving! The email told me to select what vouchers I wanted and let them know and they would forward them on! The email had arrived on the 12th of April! Pays to check your spam folder!
Posted by Rosie at 08:00 2 comments: