To Rent Or Not To Rent..

So You Want To Get Renting?

We have been considering what to do with the current house in the current property climate. There are two schools of thought:

It's a tough one. Both have possibilities and both have negativites. There is also the issue of what if we simply cannot sell the house? Some properties in this area are still on the market after a year. If we can't sell it of course we are stuck with option one as a possibility, and not a bad one. The house is desirable, good location and well maintained and the rental market may be set to increase if the mortgage still remain as they are - basically, you can't have one!

The Sell It option has two branches, the money gleaned from the selling of this property we can use in buying a bigger property to start with, or it can be invested into the upgrading/extending of the property in an attempt to start our business. It is business Capital. Or the second option, sell it, pay off the mortgage on it and use the money remaining on it to invest in a smaller property to rent - either long term or holiday. The losses on a smaller property will be less from and investment point of view and it would, hopefully, give us some immediate income and much needed practice at owning a property to rent. Also investing that cash into a property may give better return at the present that investing in a savings account. If we are mot immediately going to start upgrading the bigger property to holiday lets then it may be best to invest cash in the best place.

We are planning a visit to the bank in a couple of weeks when we are both off work - ahh a holiday!! Realised I haven't had a break (bar 4 days - 2 Xmas and 2 New Year) since August!!! - But our trip to the bank will help us see what is what and where the best money can be spent and invested.

Have also been considering chickens - basically - where to get free ones!!! But also considering the Rescue A Battery Hen Programme. We would love to think we are giving some hens a new start in life!!

We went to see a house! Oh yes!! Could you tell from the title? I shall give you an run down of what we saw, what we thought etc. 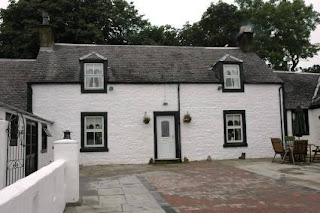 We had to drive up a farm track to reach the property, definately a plus and the track is not bumpy, a very smooth ride. First impressions, well, first impressions were this is ALOT bigger than we had imagined, very much so. It became apparent that it was not a detatched house as we had believed from the schedule but infact one of three houses converted from the original farm builds. It was essentially the 'top bar' of a lower case N with the legs forming the other two cottages. This was an immediate problem. Not becasue I am anto social but we were trying to find somewhere away from others and also if we plan to add cottages I don't want to be building right in front of someones house! But onward we went.
The couple were very friendly and had been there many years so knew much of what had 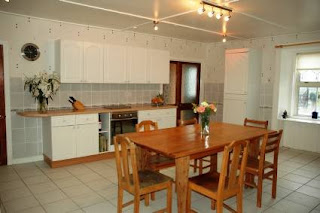 been fixed, added, renewed etc. We got the full tour. To the right of the entrance: the living room was huge and very well maintained, as was the entire house. Open fire which is one of the things on my list. Downsatirs continued through to another two bedrooms and bathroom. Going left from the front door took you to a mighty large kitchen with range. There was something quite empty feeling about the room and it felt very echo-y. But later as I was sitting at the kitchen table I realised that little wall furniture (cupboards, worksurfaces etc) could be added due to the abundance of windows and doors adourning the walls. There is a utility room off the kitchen with an outhouse beyond. A utlity room would be most handy but the news that these used to be a stable and tackroom is also interesting as perhaps they could be converted back...

The bedrooms consituted the whole of the upstairs and were sensational. Extremely open and one was en-suite. We were also told that, beyond the wall of the master bedroom, the Attic was floored and had been intended to be an extension of the ensuite and possibly a fifth bedroom. So plenty of space back there.

The front windows needed re-sealing and the boiler would need replacing in the next few years but beyond that the house was in good shape structurally.

We learned that the land the house owned was in the form of a small flat field, maybe around 1 acre, possibly 1 and a half. And the rest was quite steep hill which apparently sported a range of different wildlife from foxes to Roe deer. The land was behind the existing buildings which was definately a plus if you are considering building and we were also informed that planning permission had been approved for a four bedroom house, in the field, several years ago. So although that had lapsed it appeared that building on the land may be possible. We took a tour of the land, which has been left pretty much to itself for many, many years and it was certainly extensive and very peaceful, a great place to walk. Only issues were its steepness and that it appeared to look onto another farm that apparently was always moving very large amounts of earth around, not the best for 'pleasant country aspects'. But it wasn't without potential even if it came only in the form of rental to a farmer for sheep. It was excellent to see what 4.5 acres looks like, even if just for future reference when looking at other schedules.
All in all a very successful visit and certainly a lot learned. With only having bought one property before we are on somewhat of a learning spree with how and what to ask but visits like this, particularly at this time, allow us to see whats out there, ask questions and it is defiantely easier to think when there isn't the pressure!
Posted by Rosie at 12:30 No comments:

Remember that property that I suggested in September? --CLICK HERE--
Well, it is still on the market!!! I really think that we should go and see it, just to get an idea of the kind of thing that is available! We are, as you saw before, hopefully getting closer to a buyer for the other property so then hopefully it will be full steam ahead!!
Have seen a few more possiblities, Farm Guy To Be, even, has been off getting involved in tracking down possibilities, one with a swimming pool no less!!!
Posted by Rosie at 14:54 No comments:

Did you all think that I had given up! LOL Nope, not in the least!! The dream still lives on, now more than ever. I think the beginning of the New Year always fills you with the feeling that you can achieve, what do I want to achieve by the end of this year? People keep telling me not to aim to high too fast, and I do know this! 'Set resonable goals' they say 'you are more likely to achieve smaller goals'. This is fabulous advice, and not something I was unaware of before but people are still worrying that I am aiming to high too soon. So I have come to the conclusion 'I need a smaller goal. To keep people happy.' So here it is:

To own a chicken (maybe even two!)

Enough of the silliness down to some real info!

We are slightly closer to selling the property we need to in order to have a bit of capital behind us when we venture into the housing market. The market is still very slow here, most people can't get a mortgage so can't buy and those who have the money are holding off wondering if 'they just wait a bit longer it might get cheaper'! But it is looking hopeful, as I say, with a couple of interested parties. The problem then remains as to what to do with our current house.. anyone want it? We are going to talk to some investors and financial gurus (ah parents, is there anything they can't do?) about our options.
We are still kept positive that the dream is alive by the presence of suitable looking properties on the market, in roughly the area we are looking at. I have to admit I am always excited when I am looking, even though I know that this house is not THE house, but it reminds me that anything is possible if you work hard at it, and have a little luck!!
Posted by Rosie at 10:05 No comments: