A Walk Around the Garden 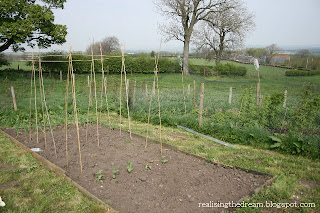 Okay, a quick tour around the vegetable patch as it is at the moment. We are moving the beds around, as all good crop rotators should and so the old potato patch from last year is gettin' beans!  I have set up the first stage of my A-frames for Runner Beans, French Beans and Peas.  The little soles in the forground of that patch are the first of some Broad Beans, they will be joined by some others that are still at the seedling stage.  Assuming that all the seeds germinate there will be 15 Broad Bean plants and twenty each of the two beans and the peas.  I have bunged some carrots in the end of this patch too.  Yep, bunged is the technical term! 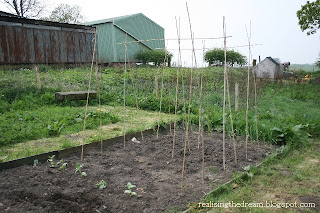 Next up is the position of the new patch.  Farm Guy said 'shouldn't we make it one big patch rather than two smaller ones?'  I said, 'You're the one digging them...'  So we are getting one big patch.  The potatoes are going in here.  Are we running late for that? Oh Yes! 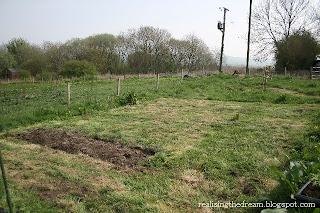 After some serious clearing I retook the Strawberry patch from the nettles, separated the million strawberries and got them in order. It now looks as so, the strawberries weren't happy about being ignored over the winter and have told me so by looking very dead and sulky but they seem to be picking up now. I was kind to some of the little 'uns and gave them their own Pop Bottle Greenhouses! 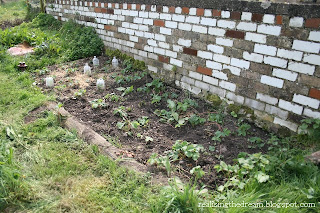 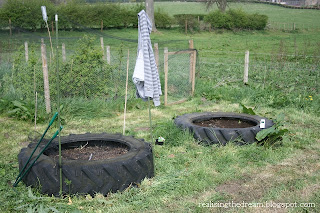 And new to the garden is Farm Baby's Apple Tree. This is just a little tree, it won't get higher than about five feet but it was bought as a celebration tree for Farm Baby and this way she'll always be able to reach the apples!!! LOL 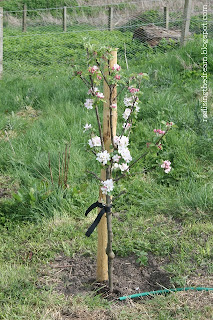