It was a hard year last year on our hens.  We entered the New Year with only 6 hens, from 11 hens and a cockerel.  Sad times.  Some we found what remained, others simply never came back to the coop.  All of our French Wheatens Marans have gone, such is the fate of the free range hen.  We discovered, quite early that the Marans were hopeless at going back to the coop.  If darkness struck before they got back they simply announced that 'the end was nigh' and sat down where they were, all our time was taken with ensuring that they were all back in the coop, this includes the cockerel!  But slowly, despite our best efforts they disappeared, two on one night!

I have to admit this left me more angry at myself than anything, I feel personally responsible for each one, I could have done more.  Gone out earlier, checked more often.  But I know that in the real world I cannot be on chicken watch 24 hours a day.  There are foxes, dogs, cats and all sorts out there.  Even a ferret which took 7 of the neighbours ducks in one night from out of their locked house!  A plan was needed.  Something to contain the hens, deter the predators and try and encourage an early retiral to the coop by all hens involved.

(Sorry for the bendy look, it's one of my homemade panoramas!)


The chicken house always had its own small pen around it, but the chickens were free to roam anywhere on the farmyard, but the land surrounding lends itself well to being fenced in giving the hens a nice area of land that is entirely their own.  It is also butted up against our top paddock, so should we ever decide more land is needed we can make adjustments.  It is a bit bare for hens at the moment but I am working on that.  My mum is a collector of shrubs - when she finds them growing in her gravel they are dug up, put in a carrier bag with some compost and sent to us.  She has been doing this since we moved in and I have quite a collection.  Planting them has always been a 'I really should get around to that' job - some of these things are huge now!  So, a decision was made and they have been planted at Chicken-Knox.  And what with the summer growth that is usually down here I think the chooks will have a whale of a time!

With that in mind we added to the flock, all was safe and we wanted to top up the numbers.  It happened slightly sooner than we originally planned we said "we should get a few more hens.  Check when the next sale is." *rustle* *rustle* "Oh its tomorrow! Right-o!"

So off to the sale we went with specifics in mind, a checklist:
1 cockerel
Some hens
Something likely to go broody

There was a lot we were interested in as no one could possibly want it unless they were us: 1 Welsummer cockerel with 2 silkie cross hens.  Who'd want that!  What a mix match bunch.  They were in a tiny cage which was dark, so most casual observers just saw 6 little eyes peering out of the blackness.  But we hung around and soon saw a handsome cockerel and two black hens emerge.  Bidding was non-existent, only a few people who seemed to be 'maybe he doesn't mean it' but we did and they came home with us for only a few pennies.

I am not a huge fan of silkies, they aren't the prettiest birds in the world, cute, but not pretty.  But I think that these girls aren't too bad in the looks department.  The photos aren't great, they are still a little shy.

Here they are with their guy.... 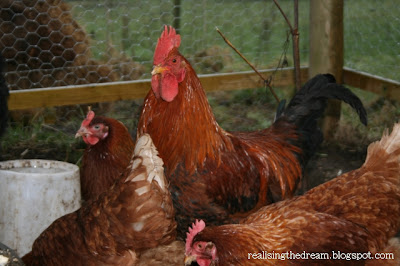 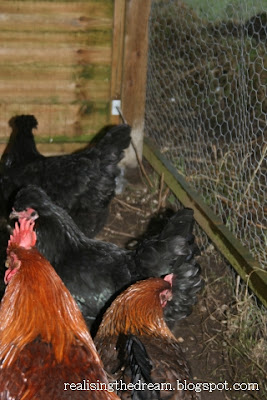 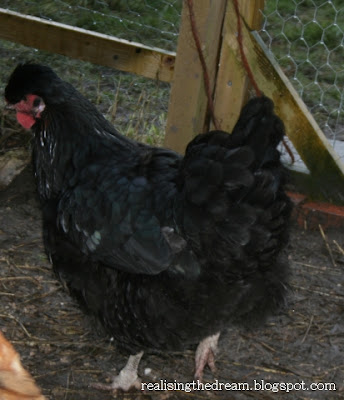 We also wanted something we were sure would lay and we are certain of age and breed and all that jazz.  So we got 3 Welsummer pullets as well.  They are lovely girls and are so funny to watch!  Its like they aren't too sure how to be chickens!  They walk up to the others and stare hard at them before starting to copy whatever they are doing! 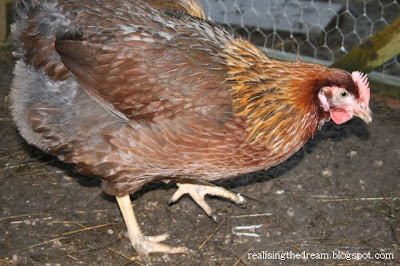 They all seem to be getting on fine and the eggs seem to be a sign of that, we are now getting 5 - 6 eggs a day, which is a great number!  I need to find some eggy recipes, and fast!!
Posted by Rosie at 21:55