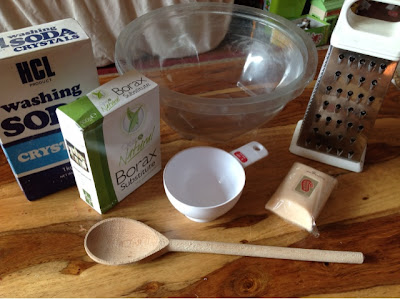 This year I am all about homemade and money saving. So after reading an article on making your own laundry detergent, so I decided to give it a go.

You only need three ingredients:
2 cups of borax
2 cups of washing soda
2 bars of soap

So I went about it, we had washing soda and soap but no borax. I discovered that borax is no longer sold in the UK for health reasons but we can get a borax substitute so that was all I needed to obtain.

It is just a case of grating the soap and mixing it well with the borax and soda, then away you go.

I was a bit sceptical as apparently you only need one tablespoon per load but I gave it a try on my whites wash.

I took a photo of a farm baby dirty sock ( no one dirties socks like a farm baby!) for a before comparison. And the one for the after! Which you will see below. I was amazingly surprised! I also did our bed linen which is all white and it turned out fabulous.

I washed on 40o on my machines Eco wash and used no softener, which I usually do but I wanted to see what the powder alone did. I used the recommended 1 tablespoon amount, which looked quite silly in the drawer compared to the usual heap I seem to add.

I did some maths for costing purposes.

So a definite saving there. I think next time I would use a cheaper soap, by using a supermarket own brand I could bring that cost down to £0.20 (ish) so that could make a cost of £0.09 per wash. I didn't factor in the fact that it appears that fabric softener doesn't seem to be needed, as I haven't tried this on clothes yet ( other than my test socks!) so I may find I still need it but I do have another recipe for homemade softener too! Another time I think.

I am also happier with the space saving too, my homemade stuff fits into a tiny space compared to the huge washing powder box. 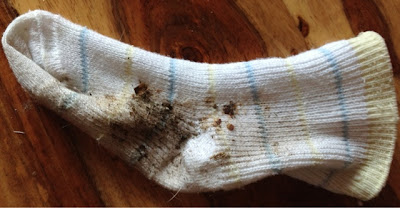 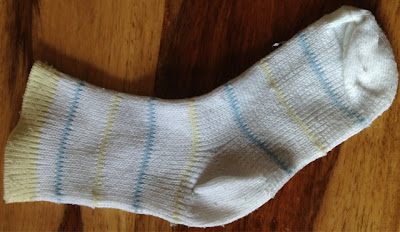