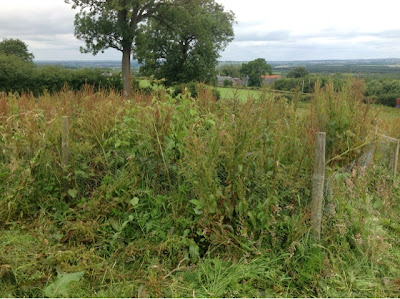 We had summer here in Scotland, I think it was last Wednesday, about 12 o'clock! Apart from that it has rained pretty much solidly since time began! As a result my trips to the veggie patch have been few and far between - big mistake! All this rain is prime weed growing weather and in our patch in particular this is not good! (For those new to the veggie patch, we reclaimed the area from a field and have been fighting the decades of established weeds ever since!)


Well, at the first sight of sunshine down the patch I went and the weeds were chest high, you quite literally pushed through until you unceremoniously dropped out into the actual veggie garden patches!  These had stayed surprisingly weed free, our laborious weeding had paid off, just the rest that may contain tigers!  The raspberry patch I had basically given up on this year.  Essentially, right it off and try to save it later, but through the dock leaf plants, which grew higher than the raspberries (see photo), I spotted red and went in to investigate.  Our little raspberries had persevered through the weedy onslaught and were producing like crazy.  I spent an hour digging them out and hacking through weeds and old raspberry canes (hangs head, I didn't prune last year  :O(  ) and came out with over a kilo of raspberries with the promise of more!!!
Well done little plants!  Goes to show what I have always thought if I just leave plants well alone they get on a whole lot better than when I faff about with them!!!! 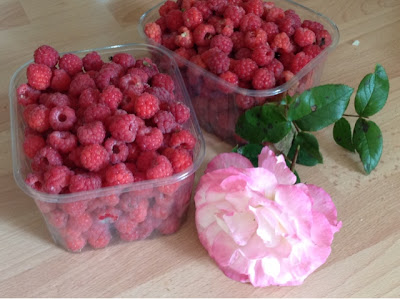