Had a couple of people discussing gardening with kids and I am a huge supporter of this. I think it's great to teach children about where there food comes from. Our eldest girl is four (nearly five) and is right into growing! Hurray! Our youngest is only just turned one, so at the moment she has more worries about how to get the food into the mouth, rather than all over the face, than where it comes form in the first place!

Our little ones are (will be) taught about it all, not just fruits and veggies but also meat. We already have chickens for eggs and we do eat the young cockerels when there are too many. We will also be sending a lamb or two to slaughter for our freezer. Obviously, I am a meat eater and I have no qualms about eating meat. But I also have no misconception of what is going on. Where I have no problem with eating meat in itself I do have issue with the welfare of the animal before and during slaughter. Just because an animal is going to be used for food doesn't mean it doesn't deserve respect and to be treated kindly and fairly. This is what I will teach my children. I will teach them that it is not wrong to eat meat, it's a choice, like choosing not to, but it IS wrong to mistreat an animal anyway during its life and death.

Sort of went off on a tangent there! At this moment we are talking about the slightly less controversial topic of fruit and vegetables. Why do I teach them about growing fruit and veg? Well, firstly because it's fun! Watching things grow. Making them grow! And then being able to see, literally, the fruits of your labour! Then you can eat them! The second reason is to show them how much effort it takes to grow, even a small amount, of food. Help them understand how long someone, somewhere, has to work in order to provide them with things to eat.

It's not about preaching to them but I think that the more we understand about how things are done the better! And that counts for me too. I'm a question asker and never turn down a tour. I recently got to look round the dairy farm over the road. I asked about everything from the cows, to breeding them, to milking, to the computer system they use to track the cows and milk amounts! Do I want to start a dairy? Nope. But I like to understand the jobs and lives of others. It's a bit like the old saying of walking a mile in someone else's shoes, learning about other people's lives makes you a more understanding person, I think anyway!

So, my daughter was learning about seeds at nursery, in a very basic way and she had also learned, at our local Science Centre, the science of how a seed works. Well, after the nursery topic was over home she came with the Broad Bean plant she had grown herself. And very proud she was too! It spent a while on our windowsill but it longed for more!

I had been investigating square foot gardening and I wanted to give it a try so I saw an opportunity. A square foot garden would be a great way for her to plant many different vegetables and also a small area to avoid her getting bored of the work taking care of it.

For those unfamiliar with square foot gardening it is much as it sounds. You split the garden into square foot sections and plant within those sections. There are plenty of websites on this topic, with planning designs and rotations. I may well do my own in the future but until then I promise you will not go lacking. I can recommend Dave's Square Foot Garden blog for some great inspiration!

Our garden was just the one bed and it was four three by three feet, giving us 9 squares to plant in. Initially there were two broad beans, her nursery one and another that I donated. We also planted a potato and a few onions. These were quickly followed by lettuce and spring onions, seed gifts from Grandad that had come free on a bottle of sherry he bought. (Nope we still aren't sure what seeds have to do with sherry, but free seeds are free seeds!). We also added some carrots. These were experimental carrots, and so far, (bar the one featured here) are the only ones to grow!

After a terrible batch of weather, something we have seen too much of this year, one of the Broad Bean plants succumbed. So we replaced it with a cabbage. And added a kale and a cauliflower for good measure.

So, what's actually in there.. 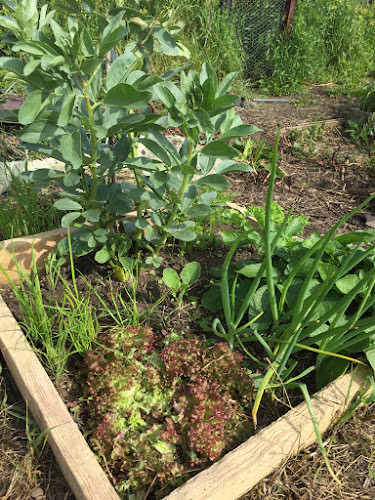 She has been very much enjoying the garden, showing it to everyone who visits. Nibbling on lettuce and spring onions as she passes. We have also harvested some of her broad beans which she enjoyed helping me prepare and insisted on something for tea that would "go with Broad Beans".

All in all I am very pleased with the square foot garden. I think it is something that we should extend in the following years and really make the most of. I feel we have probably not utilised the area to the best, as we had no proper growing plan, but it was done as a fun, mildly educational, experiment and as such has been a huge success.

**Spring Onions, for my US readers, are what you call Scallions.

I'll let you know in the future how her garden fared!

Posted with Blogsy
Posted by Rosie at 14:14