Accident At The Farm 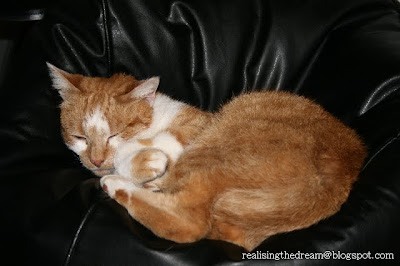 This is actually about an incident that happened nearly four weeks ago but I hadn't wanted to say much about it at the time as it was quite difficult and I didn't want to have to report bad news at the end if I had given an ongoing commentary!

On Sunday night (Sunday the 5th September) one of our cats, Rocco, appeared on the doorstep at about half eleven at night looking very sorry for himself. He had obviously been there a while and was shaking with the cold. He could barely walk and only just made it in through the door. His tail was limp and dragging behind him and he was struggling to breath. There was blood around his mouth. We scooped him up and put him on the living room chair, it was too late for a vet appointment so we called our local 24 hour vet helpline. We were advised to keep him warm and quiet and his symptoms were most likely shock based and they would see him at an appointment in the morning (Monday) at 9am. I have to admit I wasn't convinced that it was shock based, he was unable to lie down and seemed totally 'out of it'. We left him overnight and the following morning found him in exactly the same sitting position as we had left him, nothing had changed. We headed to the vet.

They listened to his chest and said he had a heart murmur and appeared to have fluid in his lungs and stomach. He was given an injection to help clear this fluid and we were told to return him the following evening for a check up. Over the next few hours he did seem to pick up but he was still uncomfortable when he tried to lie down and wouldn't eat or drink anything. We returned him that evening and his lungs were now apparently clear but the vet was still not happy with what she could feel in his abdomen, she asked to keep him in and give him and x-ray; she would call us to say what she found. And call she did. We were shopping for a few groceries when she called, it wasn't good news. She believed that he had severed the duct from his liver and his chest was filling up with fluid. Without an operation he wouldn't make it but the procedure itself was extremely risky and he only had a 50 - 60% chance of making it through that. The operation wasn't cheap either. Money was no matter to us, we wanted to give him every chance to pull through and after a great deal of heartache we agreed to let them proceed. His operation was on the Wednesday morning and that was a day of great apprehension.

We finally got the call saying that he had made it through the operation and was okay. Phew! They wanted to keep him in till Friday to watch him as it was touch and go as to whether the operation worked and the fluid may return. By Thursday however they decided he could come home as he was doing so well. He had to be in a cage for two weeks however to stop him injuring himself. When we went to pick him up we were told the full extent of his injuries. They believed that he had either been hit by a car or had fallen from one of the outbuildings (this was our preferred theory) and in basic terms everything that should have been in his abdomen was now in his chest! His liver and spleen had punctured his diaphragm and gone through, he had also ruptured various other organs. Luckily his heart and lungs had remained undamaged so he was able to pull through. The vet had said that she wasn't sure why he had even made it back to us on Sunday let alone through the operation.

Fast forward to today: his last visit to the vets resulted in the all clear. Lungs and heart are strong again and he is healing up fine. He has now been given the all clear for going outside, which has cheered him up no end although he can't do much and quickly gets tired and comes back in. His tail is still quite limp, but they believe that it will heal and is most likely fractured but he can lift it slightly now which is a vast improvement from it dragging along behind him!

So he has made it through but he has definitely used up one of his 9 lives!
Posted by Rosie at 08:00