Down on the Farm..

So, another busy weekend, many things being done in the house but there is plenty time in the week for all that hustle and bustle. Lest just spend some quiet time down in the garden. I finally got around to planting out the strawberries which had become somewhat feral in their 'Moving Day Pot', so they don't half look straggly! 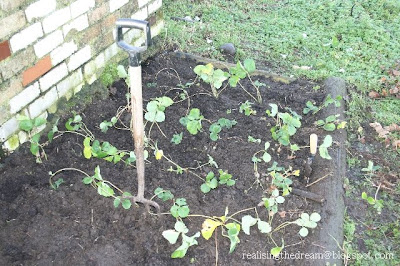 Although it is several weeks past when I should have been putting them out, they seem a lot happier with some room to move and they have produced a nice lot of little runners which have joined them in the plot. Now it is down to some serious growing guys.... 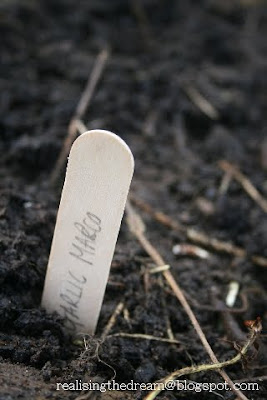 And what is this that has joined them? Oh yes, it is garlic. Now normally I wouldn't put garlic and Strawberries together but there is only one prepared bed and this is where they will have to go.

The Garlic that I planted in the container is already raring to go and has plenty of healthy looking green shoots so I am hoping that this lot can catch up. Probably about 30 plants in total planted, many another 10 in the container, so a very garlicky year 2010!

I went for a nice soft stemmed, I hope, garlic cos I want to try my hand at a bit of plaiting next year, watch this space for the, no doubt, comic attempts later in the year!!