A Tour of What's Emerging...

So much seems to have suddenly decided that the time is right for growing. My most encouraging sight is that the Raspberry canes, which were so ravaged by sheep and rabbit that I was worried that our new fruit garden would look a bit more like we were growing sticks for the fire, are now giving off life signs! However, (we have both Summer and Autumn types), this means that although all the books tell me "cut back your canes at the first sign of leaves" and "pull out the suckers" I am yet to bring myself to do it! I know I should, but I am going to leave it a bit longer, we have still been getting some frosts and rather nasty weather up here so with my luck if I did it we'd have another 3 weeks of snow and they'd all die, and these little things have been through so much!
There are plenty of other things around the garden that I can get excited about too! And here they are, on parade... 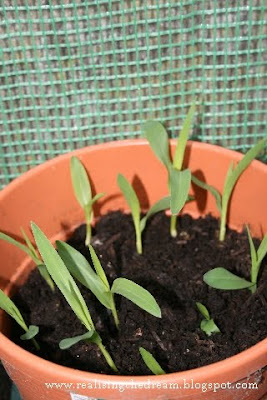 Sweetcorn, I have only done this once before and that was in a conservatory and there is some speculation as to whether sweetcorn is really cut out for some nice Scottish weather, but there is only one way to find out... 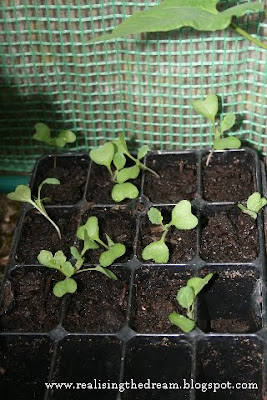 These little soldiers are Brussels Sprouts - everyone say "Ahhh". Except me, I'll say "Eugh" if you don't mind, I don't like sprouts, sorry sprout fans, I eat the obligatory sprouts on Christmas Day but that's it! Farm Guy however, loves his sprouts but only gets them at Christmas cos otherwise they go to waste, so I decided we can attempt to grow our own and hopefully get a nice load to keep him going! These guys will join the potatoes in the patch once it is ready and I am happy that these guys will make it. They are supposed to be planted directly into the ground, according to the packet, but once again I am never convinced that that is the right course of action for a cold, windy Scottish hill, so they have been brought up inside, and have now moved outdoors to harden up! - Hopefully they fair better than the tomatoes who took one look at the outside and keeled over! (Except one!) 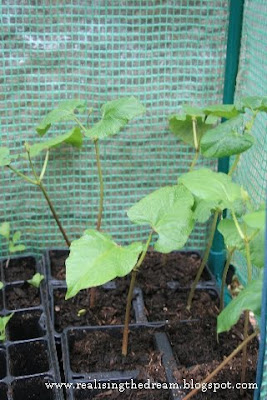 Ah, the reliable Runner Bean. These came on much better, and much faster than they have for me in the past and so are almost at a stage they can head out to their Bean Tyre, again they have joined the Brussels to harden off a bit first after their lap of luxury upbringing in the living room! 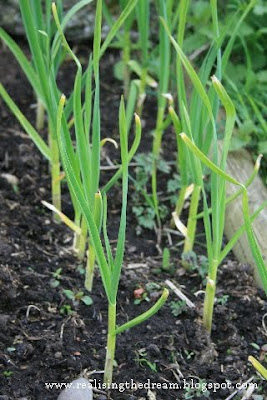 Here is my prized and overly loved (spoiled) garden delight at the moment, the garlic! I have never grown garlic and I have been so impressed that it has grown. I keep going down and looking at it and thinking "I made that grow!" I am just hoping that when the time comes there is something worthwhile at the end of those stalks! I keep having to stop myself from digging one up to peek, but that would be cheating...
I saw, don't ask me where!, some smoked garlic and it appeared to be smoked just like anything else is, so I wondered whether to have a go with a few bulbs if these work. Farm Mum has a smoker and it looks a lot like our old portable BBQ, so the cogs have been turning as to whether or not a bit of conversion could take place! 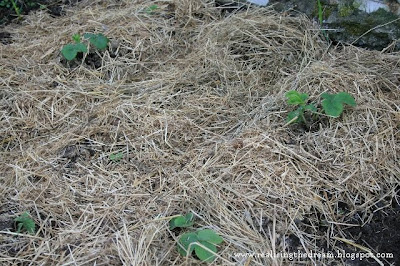 And finally the Strawberry patch.... yes, there are a lot of spaces.

So most people put straw around strawberries to prevent slugs etc, we have it for kitty prevention! We have noticed that although the strawberries share the same patch with the garlic the cats haven't attempted to 'go' around the garlic, so we assume they don't like the smell. So Farm Mum's idea for next year was to plant the garlic between the strawberry rows. This seems like a reasonable idea (unless we get garlic flavoured strawberries!) so we may try this!