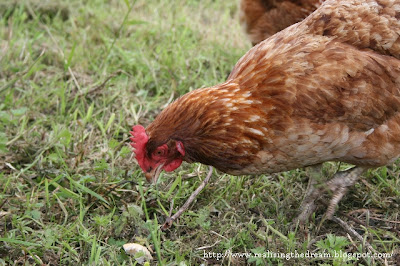 Our chicken ladies egg production has been going down rather than up, which is not the plan. So we decided for some action. One of the factors in chickens not laying is stress and it was becoming clear to us that the girls were getting stressed by the whole 'being shut in a pen' style of life. When we were visiting them they would all bunch at the door and try to slip past. We had only been locking them in to try and 'hammer home' where home was!  As they are always tucked up in their coop when I go to shut them in at night we decided that a week was long enough it was decided to bite the bullet and let them loose! 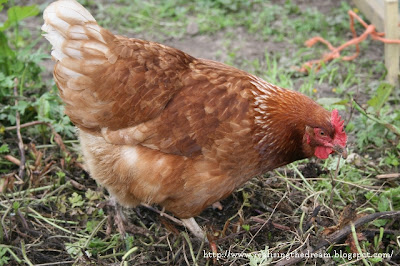 So around 10 o'clock today I went down and found a queue of hens, as usual, at the run door.  This time though I blew their little minds and just opened the door.  They were so excited that they didn't even make it over the threshold before they started scratching and pecking - there was a chicken traffic jam at the gate.  I positioned myself, along with Farm Baby, on a picnic blanket just outside the pen and we watched.  As soon as they had cleared the doorway the scratching began and for some reason no matter where I put the blanket the best scratching was underneath it!  One little hen immediately marched down the hill into the neighbours field and did her own thing down there, the others stayed close by, more about renegade hen later. 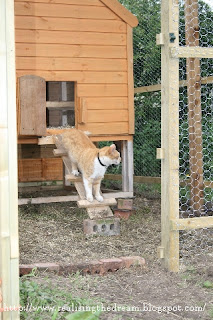 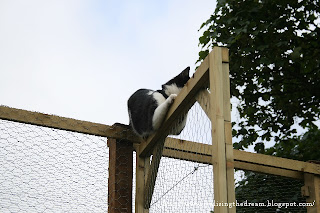 The cats were most happy that they could finally get in and see what all the fuss was about in this strange enclosure that we had built.   They are used to hens, as the neighbours hens often came into the yard but sometimes the temptation to make them go "pUUckkUUUKKK!" is too much and they try and give them a bop.  The hens seem to be holding their own  however, either giving a bop back or just giving the cat a hard stare and wandering off.  I am glad that there isn't any malice, the boys are for keeping the rats, mice, rabbits down on the farm so we don't want to put them off hunting, but the chickens aren't prey.  Perhaps we could get them 'Don't Eat Me' T-shirts or something.  Rocco (ginger one) wasn't happy with just a look around the outside, he had to see what was going on inside.  After trying out the perches (yes, he really did) he vacated.  Not his kind of place at all.  Monty just decided the whole thing was a great platform to survey his domain - thanks mum and dad for building me a castle.
We have one wandering chicken, however, probably the one that tried to escape the second we bought them and the same one that was desperate to get out of the pen as soon as she arrived.  She was the one that wandered off into the field straight away.  She is going to be a problem.  Shortly after their release it was time for Farm Baby's nap so up we went to get some sleepies in.  I glance out of the landing window and their is said chicken marching across the yard, a good distance away from the coop, she'd have to pass through a couple of barns to get there.  I complete the baby horizontalification and go back down, the chicken has gone.  From the yard it is easy to get onto the road, and although it is a quiet country road we are on the brow of a hill and you can't see what is just on the other side, and people often take it too fast.  I don boots and go off to check for her. 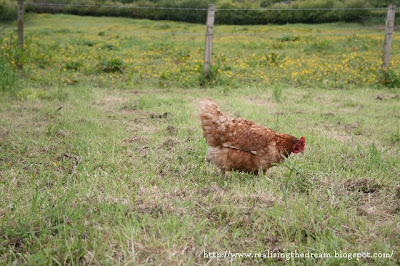 There she is, standing in the middle of the road, she has gone down the road, past our farm and is now looking lost.  I stand in the middle of the road and call.  She looks at me as only a chicken can.  I flap my arms like a chicken.  The stare continues.  So, shameless as I am, I add some top of the voice clucking.  She comes running.  That crazy chicken run, the legs kind of splaying to each side, wings open.  She follows me back round to the others who don't seem to have even missed her.
Later, after a trip out, I return.  Its scraps time so I go straight round with my 'chicken bucket' from the kitchen.

I feed the others then go looking.  This time she is tucked in between a couple of barns giving it legs in some dirt and completely oblivious to me.  I ask politely if madam would care for some scraps.  I get the chicken look and she goes back to her pecking and scrapping.  Fair enough.
No increase in the eggs, still only one today, and I am sure it is by the same hen, always same colour, shape and position.  But hopefully there will be more as they settle into the routine.  Haven't got to locking in time yet so I hope I find a full compliment of chickens when bedtime comes!
Chickens on the Loose - The Video


Okay, this is my first ever video so please don't laugh to hard, you might pull something!  I would also like to apologise for sea sick enducing nature of some of the footage, we have a brilliant little camcorder, great for pocketing but don't the easiest to use, I shall try to improve for further vids!
Rocco is featured in this he is our little 'cut 'n' shut' cat who went through the big operation where they had to re-build him (hence cut 'n' shut cat)- see here for story - I think you'll agree he is looking good!  Even if his tail is a little wonky!