Bum, Bum and a double dose of double BUM!
Not a good day, this was yesterday not today.  I was up to my eyeballs yesterday with the thought of blogging far from my mind.
Let me elaborate and to do so I must take you back further, to the day before.  There had been no sign of one chicken.  At any feed time, both feed and treat!, there was only ever 7 hens.  I was mildly worried but not overly so, they do wander around and perhaps we were just missing each other.  My worry was that the farmers dog had got them, she has form!  Our neighbour caught her with two of their three hens in her mouth.  Both were rescued but one suffered a limp for several days.  That evening however all 8 were tucked up in their coop at doors closed time.
Next morning I saw that my fears had been realised, chicken 8 was sitting in the grass, most of her back feathers missing and when she tried to walk it was a hop!  I checked her over, beyond a raw back there was no physical damage and she was feisty enough.  She ate well and drank but she decided to stay tucked up in the long grass by the coop all day.  If they were laying badly before a meeting with Dog isn't going to improve things.
I have to admit at this juncture that I don't KNOW it was Dog.  But she has form and was seen lingering around our farm gate most of the day with a suspicious look in her eye, I thought she was after the cat.  She is under also suspicion for possible involvement in the incident which created Cut 'n' Shut cat.
I retreated to the house to begin my chores.
The kitchen sink is blocked.  No problem, its done this before, I'll get the plunger on it.  No cigar.  Made no difference.  Must be blocked solid, I'll leave it to Farm Guy, as I am not geting involved in taking pipework apart.  I got on with my other chores, which included laundry... can you guess whats coming next?  I didn't.  I go back to the kitchen.  The pipe blockage is apparently some distance down the pipe as it has also stopped the washing machine from emptying.  (They both go into the same pipe to leave the house)  So the washing machine has emptied into the sink, and across the work surface, and into the cupboards below, and across the floor, and under the cabinets on the other side, and into the door mat, and under the bin.  I get some towels and a mop. 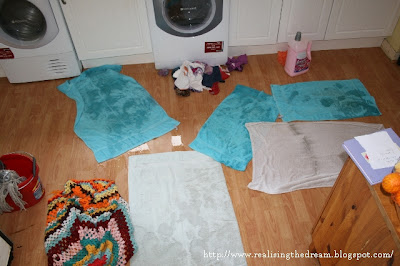 I didn't do any more chores.  I don't like today. 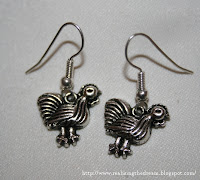 I sat in the living room with Farm Baby and made girly curtains for the downstairs bathroom.  I also made Chicken Earrings to celebrate my (non-laying) hens!  I couldn't find any earrings I liked but I did find some cute charms, so decided to make my own.  I also got some Strawberries charms too, so I have a pair of Strawberry earrings now too!  I had to buy loads of charms so I made many pairs, if you're interested I am selling them on eBay - shameless advertising!
To top off my delightful day I would like to add in this day as well.  I thought we may have been getting over the chicken not laying hump as we have had an egg a day for the last three days (no zero egg days inbetween), even with Suspect Dog Attack Day.  But today scuppered that, zero eggs.  To make matters even worse on the egg laying front I found the farm cats asleep in the nesting boxes!!!!  Come on!!?  If this isn't a sign that the world is conspiring against making these chickens lay I don't know what is!
Posted by Rosie at 20:38