There's a chicken in the... 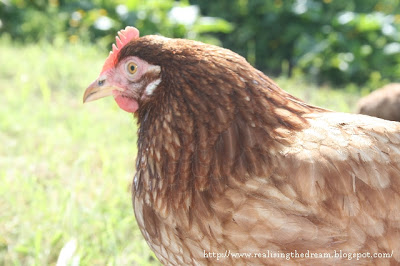 So, what's been happening with the chickens? Well, I can tell you what's not been happening. Egg laying, that's what. I have to admit to a certain level of person-without-patience disappointment. I know it has only been a week but there is something quite sad about going down to the coop to collect the non-existent eggs. There is always a level of hope that today will be different, there will be a pile of beautiful eggs, but nope. Their egg numbers have dropped steadily since they got here, we are down to none or one a day and figure that this doesn't seem right, not for a hen breed that averages 280 - 300 eggs a year, even if we don't manage that we should manage more than one from eight hens! So we are on chicken check.
We have researched all the possible things that could cause chronic egg failure and are going to tick them off one by one.  Our thinking so far is as follows:
It could be that they haven't settled in but they certainly don't appear to be fussed or stressed or 'out of sorts' but it could still be that, nothing to do about that but wait.
We aren't sure of their exact age but we are sure they are neither too old nor too young. I don't believe it is that at all, they laid 5 eggs on the afternoon they arrived, so I cannot believe that they suddenly decided they were too old the day after they got here!
We aren't sure of worms but they seem parasite free. Again it seems unlikely to us that they suddenly went off lay the day after we got them cos of worms, but we will look into worming anyway.
As a result we are going for feed.  This seems to be a common problem so a change to diet is called for and Layers Pellets is the new grub of choice. We went off today and bought the new food and they started it this afternoon.  We'll have to see if that makes any difference.  If it doesn't we shall look at the next of the  possibilities.
Talking of feed a couple of cheeky chickens appear to have found where we keep the new feed (and the old stuff and the guinea pig food).  Apparently the new stuff is a hit as it is good enough to steal!  These two, you have never seen two smugger looking chickens!  As you can see this particular shed is well organised!! 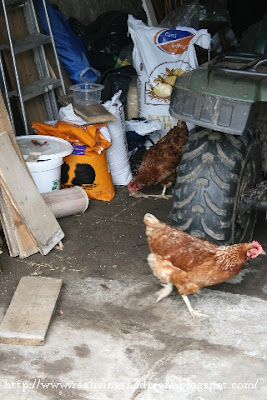 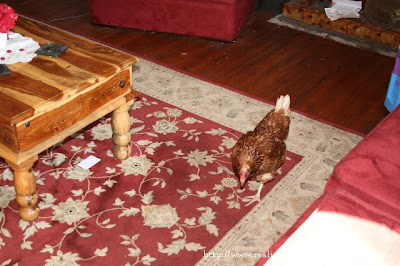 The chicken invasion continued.  Yesterday was a brilliant day here, really hot weather and ideal exploring conditions for a renegade hen and her big fat hen friend.  Whilst sitting have a moments peace during Farm Baby's morning nap I glance across my living room and the invasion has begun.  This is Renegade (seems as good a name as any) she has let herself into the kitchen, both front and back doors were open I'll admit, and is now becoming more frustrated with her inability to peck up the rug pattern!  She is duly shooed back outside.  This little lady is a one for adventure, the same evening I had to go through to the neighbours garden and extract her from under the hedge.  I had failed to lead her, piece of corn by piece of corn, to the hole in the fence.  She nearly got there but the presence of a tree just boggled her mind and she turned around and headed back.  I had no choice, I went round through their front garden and scooped a chicken.  Their dog was bouncing of the living room windows... oops! 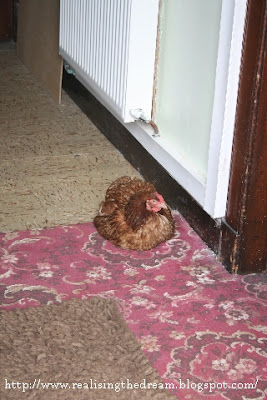 Shortly after the living room wave of hens had been dispatched, I went through into the hall.  To discover a chunky hen sleeping on the carpet!  Have these chickens got no homes to go to?  I think Renegade is a bad influence on her fellow flockmates!  This particular chicken was less easy to 'scoot' ,she insisted on competing in a long staring match with the guinea pig before she allowed herself to be ushered out of the door: accompainied by the sound of victory squeaks from the pig!
The afternoon was spent lazing in the sun with farm baby and a magazine, too nice a day for chores, who needs clean plates anyway, we'll just get takeaway!  We shared an orange, chickens don't like orange, although a piece of peel, snaffled from the blanket was good for a game of chicken style 'Capture the Flag'. 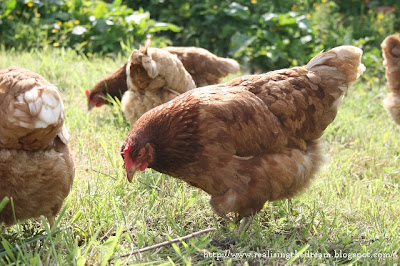 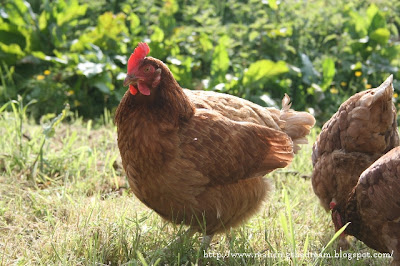