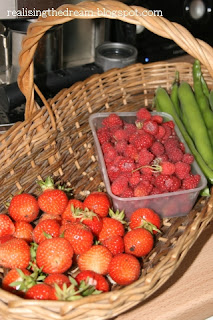 Off down the veggie garden today and it proved to be a fruitful visit.  The strawberries have been mainly one here, one there, one in the mouth so I resisted the urge to go down to the patch for two days to let them ripen and it has paid off!   The little wonders produced 500g (about 1lb) of tasty fruit.  One of which immediately went to Farm Baby!  This happens for two reasons: firstly, she loves strawberries and woe betide you if you don't just make with the strawberry once it is in her sights.  And secondly, because seeing her clasping a strawberry as big as her hand, with juice running down her chin and a big beamy smile on her face is just too cute to miss!

The raspberries also have produced a bumper crop today, also 500g.  The raspberries have now produced over a kilo (2 lbs ish) and, apart from the ones that ended up as Raspberry Curd (see below), they have been being saved to make jam.  I think I should have enough.  I am looking forward to using the jam set that I was bought as a Christmas present by my parents.  It was a everything-you-need-and-more set from wooden spoon to big ol' pan to jars and fabric for lids!  Up until now I have been making jam in tiny batches in my unsuitable saucepan and then taking the next two days to scrape solid lumps of jam off the hob and wondering why every time I cook anything it smells like burning fruit!

The chickens are doing well.  We did have a random two egg day but it is all back to normal now averaging four a day.  I am going to try putting up some "curtains" across the nest boxes, or at least one or two as I feel that the hens are finding them quite exposed.  They won't use one if another hen is already in another - perhaps this is normal behaviour?  But with 11 hens using essentially one nest box because of their politeness there is some queueing at peak hours!  I decided I would try it, see if they preferred it, hated it or it made no difference.

The 7 remaining bean plants are doing their best to make up for lost time but seem to be doing so by forgoing the growth of leaves and going for height.  I am assuming they no what they are doing and am leaving them to it.  The peas have some huge, but flat, pods on them so I am looking forward to that.  And as you can see I managed around 8 Broad Bean pods, but future stocks look healthy.

There may have been a miraculous return by the carrots.  There are currently about 7 decent carrot plants in a bed which I'll admit is turning into a nursery for dock leaves.  However, today I spotted some little grass like growth in vague lines appearing through to weeds so some emergency weeding was done - carefully - and we will have to see what comes of it.

The cabbages have been attacked but what I assume to be cabbage white caterpillars.  However, there is good news there too.  The cabbages were one of the plants that succumbed to the mysterious death in the patch this year.  A new sowing was required.  So beyond around 4 (now munched) big ones the rest are way behind.  This has been a slight blessing as this means that they were of no interest to mummy butterfly and she has avoided them, hopefully by the time they get bigger the caterpillar season will have passed.  Just hope they don't take too long.  Same goes for the Brussels.

Garlic is nearing completion and onions and beetroot are looking plump.  No one in the house eats beetroot, it is being grown for two reasons.  I had about three packs of seeds and also I have red that Red Velvet Cake is traditionally made with beetroot to give it that colour and I would love to try it.  I also want to try making a cake with mashed potato which apparently makes them very moist.  I should be able to make a load of cakes from the veggies in the patch which would be great fun!

And breathe.  So I think I have got you all up to speed.  The weather here is awful, rain again, but it does mean - no need to water! Hurray!

Whisk ingredients constantly over low to medium low heat- you don’t want it to boil!

When mixture has thickened somewhat (after 6-8 minutes), add butter 1 Tblsp at a time, whisking constantly.

After butter has all been added, continue whisking for another 2-3 minutes.

The whisk should leave marks on the surface of the curd when it is done.

Remove from heat and pour through a strainer and into a bowl.  Let cool for about 15 minutes then cover with a layer of plastic wrap right on the curd so a skin does not form.  Refrigerate for at least a couple of hours to allow the curd to finish setting up.