You Can Never Have Too Many!

Well, perhaps you can but I refuse to believe it. As you know we have chickens (I may have mentioned them!) What I may not have mentioned was that we also wanted a cockeral. Our primary reason is that we want to be able to perpetuate our flock and not have to buy chickens again. But a secondary reason, added on after my enjoyment of the auction is too explore the world of hen selling. Not in a big way, more in a 'if we have some spares' way. With this in mind we decided that sooner was better than later in getting a cockeral. The ladies would benefit from his protection and guidance and if you are going to dive into something you may as well go both feet first!! 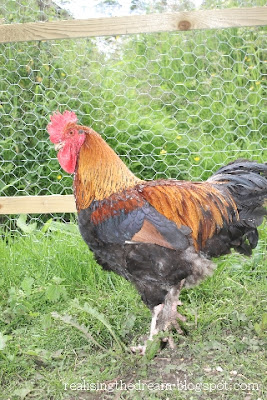 So off to the chicken sale we went (yes there was already another one) and this one was packed with cockerels. Not many on their own, but as I said above, you can never have too many hens!!  We spotted a Rhode Island Red that we were quite keen on.  Our eight ladies are a hybrid of RIR so a pure male was definitely an idea, it would mean his size was about right for our girls, don't want any squashing!  We aren't after pure bred chicks, just chickens, so the breed of male didn't really matter.  We were going to get crosses anyway because Lohmann Brown Cockerels seem exceptionally elusive.  There was however a couple of other groups that interested us and they came up before the RIR group.  The first was a quartet of Buff Sussexs.  We were interested until we saw them.  Two of the females had been quite thoroughly plucked by the third.  It could just have been stress of the situation but when all you have to go on is the look of the hens we decided against it.  We watched them though to see what they went for, give us some idea of the price people were going to for groups.
The next up on our interested was another quartet.  I had spotted them shortly after we arrived.  I wanted a 'proper' cockerel, as I call it, like the RIR's are.  A cockerel with plenty colour and a decent size without looking like a small turkey.  This was a Maran Quartet.  The cockerels are described as not exactly friendly but not aggressive, more aloof.  They are slightly smaller than RIR cockerels which we thought was almost a perfect size for us.  These guys were French Wheaten Marans.
The auctioneer built them up -
"Lovely group.  Rare breed.  Great example.  If you don't want the cockerel the owner will happily take him home again"
Not us, we want the cockerel.  On and on he went about these birds before the auction began, so different than the usual "Here's some chickens who'll give me a fiver".
"These are something special" I thought, "The ones in these big cages always are, the cockerel is a handsome boy though".  It was fun to dream.
We had already decided our top money, no going over, just like before.  We awaited the auctioneers start price.  He started the bidding.  Opening price was almost double our pre-decided top.  My heart sank until I saw that Farm Guy had bid!
I looked at him.
He looked back at me with a "What?" expression.
I mouthed the bid amount with a questioning look.
Farm Guy looked shocked, he had misheard.  He quickly asked to retract his bid, saying he had thought the auctioneer had said something much lower (less than a quarter what he had in fact said).  It was the old "-teen" & "-ty" ending mix up.  Farm Guy heard -teen and it was -ty!  The auctioneer laughed and gave a "These birds?  For that low price?  You'd be lucky!" snort.
The auction started again.  No one bid his high price.  He lowered it.  And lowered it.  And lowered it.  When he had lowered it to what Farm Guy thought he said in the first place, we bid.  A couple of people made a couple of half hearted bids against us and even though the auctioneer kept the auction going as long as he could (another "Drop The Damn Hammer!!!!" moment) no one was interested.  We had won!
With the final bid being less than half Mr Never-Get-Em-For-That-Auctioneer had originally tried to command, I couldn't help feeling a little bit smug as we gave over our number! 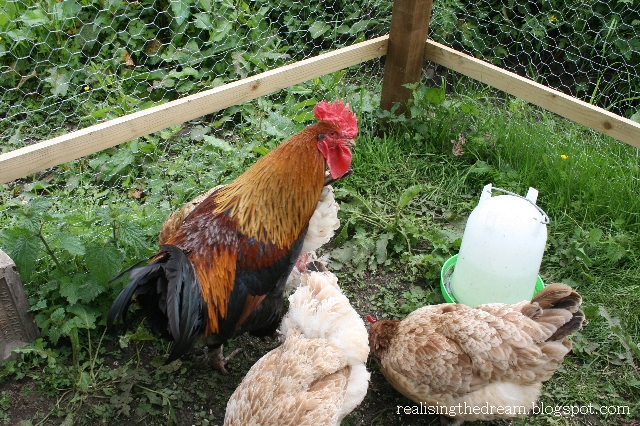 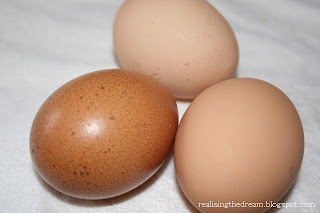 So, we are now the proud owners of three French Wheaten Maran hens and a rather attractive cockerel.  This does put out hen count up to eleven (gulp - so many eggs) but Maran hens don't lay anywhere near the number of eggs our girls do - less than half per year.  And we are not against the prospect of selling our excess eggs at the farm door.  When it comes to chicks we should be able to tell the breeding of the chicks based on the colour of the eggs.  Marans lay much more chocolatey coloured eggs than our Lohmann ladies.  A breed with differing coloured eggs was also on our list of wants for just this reason, and fun at the egg collecting!
Introductions look to be a relatively smooth ride but time will tell.  We have sectioned the chicken run and provided a makeshift coop for the newcomers.  With only some stock wire between them Lohmanns and Marans are close enough to see the whites of the eyes!  Mr McNugget strutted his stuff as soon as he saw our girls, he seems perfectly happy to gain a few more lady friends.  All but one of our hens immediately rushed to the wire to get a good eyeball of the stud-muffin in the run.  The Maran hens act as all French ladies do, with elegant decorum.  Our seven now spend most of the time hanging around, even with wire between them he has control! LOL  The eighth Lohmann lady kind of rolled her eyes at his posturing and went looking for worms! 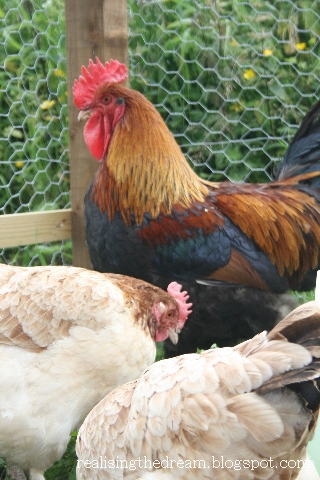 McNugget and his girls
Posted by Rosie at 20:08